Hello everyone, Nemekh here with an update on the latest 5.05 Patch & Edensgate Savage release!

Firstly I know many players were eagerly awaiting significant changes for Summoner in 5.05’s changes. I would like to detail & discuss them below. 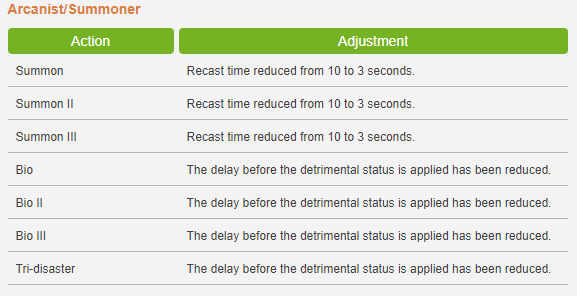 Summon I, II & III now have their cooldowns reduced to 3s.

This opens up the possibility of using Titan Egi for Earthen Armour without losing as much much damage by having Titan out for 10s. Though be mindful when doing this, as you must wait for Earthan Armour to resolve after using an Egi Assault charge before swapping back. If you swap too suddenly after using the Egi Assault command it will result in nothing.

This also potentially opens up the use of Aerial Blast in single target scenarios, however, we’ll look into the swap costs in egi autos for doing so.

In Dungeons this is a slight Quality of Life change when changing from Ifrit on bosses to Garuda for trash, though in this regard it didn’t really affect anything.

This change came out of left field & has been an old wishlist item for older Summoner players.

Where before hardcast DoTs & Tri-Disaster would apply ~0.7s after cast & instant cast spell DoTs would apply ~1.2s after cast, now all our DoTs apply effectively instantly with an application delay of < 10ms, or < 0.01s.

This is very nice in that we can now do things like this immediately without them whiffing:

The change does come with a result that will slightly affect our playstyle in that we have had many, many years of being used to DoT application delays, or the “travel time” as players have previously called them.

Our older DoT application advice recommended that we hardcast Miasma 3 into Bio 3 with < 3s left on a DoT duration so that after Miasma 3 had finished casting it would apply in time as the DoTs would fade. Now doing so will clip the DoT duration at the end needlessly, so we need to be mindful of that.

Similarly, Tri-Disaster must be applied as old DoTs fade, rather than slightly before, or else this will again result in DoT duration clipping.

It also means that hardcast Miasma 3 & Bio 3 will now have ~0.6s of a time difference between their statuses instead of ~1.2s, meaning that we are less likely to lose a Bio 3 tick in between.

Another positive due to this change is that it now means it’s even easier to snapshot buff windows, especially where before if we tried to snapshot the tail end of buffs it would miss entirely. Now it will now miss in that scenario.

While players are feeling disappointed at the lack of changes to our 5.0 era concerns, myself included, I will not deny that the DoT change is a surprising & welcome QoL change, but not the one we really hoped for nor needed.

Please keep in mind & be hopeful for more significant mechanical changes in patch 5.10 which should be around October, just as 4.10 had delivered many appreciated changes to Summoner in Stormblood.

Thanks for reading. Keep on Summoning & have fun with the new raids!